In which we are introduced to Dr Stephen Maturin.

One of the greatest fictional characters created in the 20th century is Doctor Stephen Maturin, half of the celebrated Aubrey-Maturin duo that are the subjects of a 20-volume series of novels by the late Patrick O’Brian. The series began with the 1970 novel Master and Commander, and was to be continued in a 21st volume which was in the draft stages at the time of O’Brian’s death in 2000. The books follow the career and life of “Lucky Jack” Aubrey, a Captain in His Majesty’s Royal Navy, and his close friend, Maturin, during the time of the Napoleonic Wars, from roughly 1800 – 1815.

Stephen Maturin is one of the richest characterizations ever penned. Over the course of the novel series we discover that he a musician, a physician, a surgeon, a naval officer, an international spy, a polyglot, a scholar, and a natural philosopher, or what we would today call a scientist. A man of parts. He is a real man, however, in O’Brian’s writing, with real shortcomings as well. He is not handsome (his looks are often described as “reptillian”), he is not suave, he is at times short-tempered, he is at times cold. He is a Catholic, and an ardent lover of political freedom. He is also never characterized with any sense of anachronism, and so his understanding of science is that of a man of his era. This is strikingly illustrated in a scene from the novel Master and Commander, where Stephen is simultaneously performing a dissection and enjoying his luncheon. When he goes to cut his meat, he intends to use the same knife that he has been dissecting with. A companion suggests that “Perhaps we ought to wash it,” but Maturin replies, “Oh, a wipe will do,” and uses a corner of the sheet for the job.

In Peter Weir’s 2003 film, Master and: The Far Side of the World, he draws the main plot outline from the tenth novel, The Far Side of the World, but also incidents from the first novel, and many others in the series, as well as some original material that is very much in the spirit of O’Brian. Though the series was often as concerned with events on land, and with domestic as well as bellicose drama, Weir wisely chose to limit the scope of the action to the contest at sea. Aubrey’s ship, the Surprise, is tasked with capturing or sinking the French frigate Acheron, and they chase them around the coast of South America. “It’s all about being at sea and how that informs the crew of the HMS Surprise,” Weir said. “I always wanted to open the picture at sea and to hardly touch land at all.” Along with this overall focus, he hones the character of Maturin (Paul Bettany) to a fine point, by focusing on three main occupations: surgeon, musician, and naturalist. Maturin’s espionage activities, which drive a great deal of the plot throughout O’Brian’s novels, are reduced in the film to a mere hint in a throwaway line of dialogue.

Perhaps something from the London Bach this evening, Jack?

Maturin’s abiding and multi-layered friendship with his Captain, Jack Aubrey (Russell Crowe), is established in several scenes of musical dialogue between the pair. Maturin is a cellist, and Aubrey a violinist. The two enjoy evenings of music making together as frequently as weather and duty permit. The film score reflects this in several poignant ways during other scenes, as we shall see.

Those are his brains.

In both the novels and in the film, Maturin is revered by his shipmates, because he is a physician, not merely a surgeon. Today, of course, a surgeon is an accomplished and skilled medical doctor, whose training is perhaps even more extensive than the minimum requirements of the MD. At the time, however, a ship’s surgeon was literally a glorified barber. The typical surgeon was not trained in medicine in the modern sense, but rather was primarily tasked with various amputations when the need arose. Maturin removes his share of limbs, but he is depicted in an early scene also performing a brain operation. He has to drill a hole in a man’s skull to relieve pressure, and then he screws on a metal plate fashioned from a coin to cover the hole. This type of activity garners him the undying respect and admiration from his shipmates, both the common men and the officers. Among the sailors, especially, one of the ways he uses this admiration is to try to dispel some of their more superstitious beliefs, though he is rarely successful in that.

By the “artistic decision” of choosing to keep the action at sea primarily, Weir establishes one of the main themes of conflict that surrounds the character of Maturin, that of the “requirements of the service” against the progress of scientific inquiry. The Royal Navy can be credited with assisting in some of the greatest advances in Western science in the 19th century. To pick one example, Charles Darwin famously traveled on the HMS Beagle a few decades after the time in which Maturin was voyaging in the Surprise. And like Darwin, Maturin was destined to have great discoveries on the Galapagos Islands.

Maturin and his assistants on the Galapagos.

Maturin is promised an opportunity to spend time exploring, collecting, and cataloging the natural wonders that are present on the Galapagos. These are creatures with habits and forms “unknown to science,” as he says upon seeing a swimming iguana. When the exigencies of chasing their enemy cause Captain Aubrey to renege on this promise, a heated conflict between the two friends ensues. This is a brilliant example of what O’Brian often wrote about: the contest to achieve “moral advantage.” While Aubrey argues for the demands of his duty to chase the enemy, Maturin argues for the personal duty of keeping one’s word. Maturin has no power but the bonds of friendship, and he will not win. It is not until Stephen is accidentally shot by a marine attempting to hunt a bird, that Jack puts his friendship above the call of duty and chooses to halt his chase. This scene where Jack makes this decision is scored with harmonious string music (both cello and violins are heard playing). Maturin performs an extraordinary self-surgery to remove the bullet from his side, and after recovering, is able to explore the wonders of the Galapagos. The shift of focus, both in camera and in the narrative, heralded by the violin in the score.

During the exploration sequence, the film score relies on solo cello music to represent Maturin as he wanders about with his assistants, collecting specimens of flora and fauna that were hitherto unknown. But when he spies the enemy ship at anchor across the bay, the score changes to an insistent and pulsing solo violin-Aubrey’s instrument. It is clear that Maturin will sacrifice these inestimable treasures he has collected in order to return and inform Jack, as Jack had already sacrificed for him in halting the pursuit of the enemy vessel to ensure he would survive. So the tension between the demands of war and the pursuit of science is perhaps not resolved, but it is at least brought to a detente through the friendship of the unlikely pair of protagonists.

Does God make them change?

Maturin’s Irish lineage and his Catholic religion are, like his spying, mostly relegated to the fringes of the characterization in the film. However, there is at least one line in the movie which is a lovely tribute to the idea that religion and science should and need not be enemies. When a midshipman who has come to be Maturin’s assistant is reading a book about adaptive disguises in nature, he questions,”Did God made them change?” Maturin replies, “Does God make them change? Yes, certainly. But do they also change themselves? Now that is the question, isn’t it?” In this brief exchange we see Maturin’s humble and matter-of-fact faith, which in no way limits his scientific curiosity. Today, when religion and faith are often put at odds with one another, I find this a refreshing and insightful moment.

Stephen Maturin is seen by many observers, including actor Paul Bettany, to be an alter ego of Patrick O’Brian. The character certainly concentrated many of the author’s concerns and interests into a dynamic and indelibly memorable personality. Bettany, under Peter Weir’s expert direction, brought him memorably to life in a beautiful and moving film. After my first experience seeing this film, I was inspired to read the entire Aubrey-Maturin series of novels, which I credit as one of the greatest achievements in fiction of the 20th century. I count Doctor Stephen Maturin, natural philosopher, as one of my fictional heroes, and I am forever grateful for the film adaptation for so faithfully transporting his spirit from the page to the screen.

This post is part of the Movie Scientist Blogathon, hosted by Christina Wehner and Silver Screenings. Be sure to check out more of the great posts in this series on other blogs! 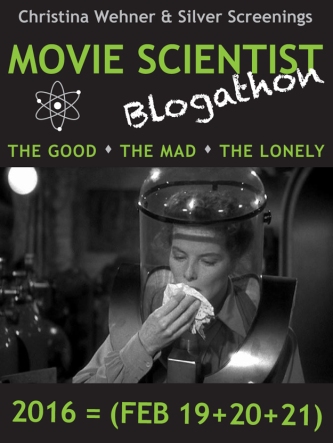