The eponymous villain of our story.

Mr. Arkadin, the film, may be regarded as a minor work in Orson Welles’s oeuvre, but his characterization of Mr. Arkadin provides a vehicle for some of his most subtle ruminations on the nature of evil. The film, released in various versions around the world starting in 1955 (and sometimes given the alias Confidential Report) is a convoluted potboiler, relatively unremarkable in the basic outline of the scenario, and steeped in the noir and crime fiction tradition. But through the distinctive editing, camera angles, and stylistic flourishes in the costuming and makeup, Welles gives us more than a first glance might afford. We find an exploration of sin, duplicity, and the grotesque that makes us question what makes a person a villain, and perhaps implicitly looks for a spiritual source for redemption.

Guy Van Stratten is the protagonist, an implausibly named American small-time smuggler and crook, played by Robert Arden. Arden is somewhat unfortunately cast, as he is not quite up to holding his own against a force like Welles. The film could have been greatly improved with the casting of a actor with more gravity in the lead, like Jo Cotten…but I digress. Van Stratten is witness to a dockside murder which sets the story in motion. The murdered man’s final words offer a clue: “Arkadin.” Arkadin (Welles) is a wealthy industrialist of questionable, but unknown background. Van Stratten determines to find Mr. Arkadin, and with the help of his sometime girlfriend, Mily (Patricia Medina) find a way to make the connection to the murder financially lucrative, whether through blackmail or other means. The plan is complicated when Van Stratten meets Arkadin’s daughter Raina (the eventual Mrs. Welles, Paola Mori) and possibly begins to fall in love with her. Arkadin calls Van Stratten in to reveal to him a secret: Arkadin is an amnesiac with no memory of his early life before his rise to wealth and power. He hires Van Stratten to prepare a “confidential report” about himself, essentially digging up any dirt before any of his enemies or potential business partners. The catch is that Van Stratten has to promise not to see Raina again. The rest of the plot revolves around Guy attempting to untangle the complex web of Arkadin’s past. The secret turns out to be rather standard noir fare: involvement in a vice ring. But Arkadin does not want Raina to know of his past. This is the leverage that Guy holds, and which leads them to the final confrontation, a life-or-death battle fought on the battleground of Raina’s heart.

The “Crazy Frankensteins” are available to play at your next event!

The duplicitous nature of Arkadin is reflected through his appearance and his words. When first we meet him, it is at a masquerade party. The guests are wearing Goya-inspired masks, but Arkadin wears a cloak and a generic reveler’s mask. Although it is noted that he never likes to be photographed, it seems that plenty have seen him, but none know who he truly is. It must be noted that the makeup for Welles’s character is atrocious. The obvious falseness of his wig, beard, and putty nose would make even Grouch Marx’s greasepaint embarassed. When you consider the still-impressive makeup created for Welles and others that allowed them to so convincingly age decades in Citizen Kane, there seems to be little chance that this is an oversight, or a budgetary concession. The garish closeups on Arkadin’s face almost dare the viewer to call him a fake, to his face. His beard is even described as “fake” by another character at one point. No, it seems clear to me that Welles was making a statement about the character, and through him, about the nature of evil.

For Arkadin is a villain, without any doubt. Though his villainous nature may be somewhat tempered in our estimation by his love for his daughter, it is also clearly a selfish love. He wants her for himself, not caring what is best for her own happiness. But a capacity for deception towards others is also a capacity for self-deception, at least that’s what Welles seems to be saying through Arkadin’s life story. Though Arkadin claims to have experienced total amnesia at a critical point in his past, we have only his word for that, and many reasons to suspect that he is lying. The rather obvious key to Arkadin the man, and Arkadin the film, is delivered by him in the following fable:

And now I’m going to tell you about a scorpion. This scorpion wanted to cross a river, so he asked the frog to carry him. ‘No,’ said the frog, ‘no thank you. If I let you on my back you may sting me and the sting of the scorpion is death.’ ‘Now, where,’ asked the scorpion, ‘is the logic of that?’ For scorpions always try to be logical. ‘If I sting you, you will die. I will drown.’ So, the frog was convinced and allowed the scorpion on his back. But—just in the middle of the river, he felt a terrible pain and realized that, after all, the scorpion had stung him. ‘Logic!’ cried the dying frog as he started under, bearing the scorpion down with him. ‘There is no logic in this!’ ‘I know,’ said the scorpion, ‘but I can’t help it – it’s my character.’ Let’s drink to character.

The mutually assured destruction of Arkadin and Van Stratten is foreshadowed, but if you apply the analogy too closely, you must question, which of them is the frog? For the frog is innocent, but really, neither Guy Van Stratten nor Arkadin can be considered a victim. They both have the character of the scorpion.

Welles claimed to hate symbolism, but it’s unavoidable to see the masquerade party, and the later Christmas party where Arkadin perversely is dressed as Santa Claus, as anything other than visual symbols of the theme of deception. Much like Arkadin’s false face and beard, his revelers wear grotesque masks that are explicitly modeled on the dark images from the artwork of Francisco Goya. Welles clamed to have designed the masks to each be a direct copy of one of Goya’s etchings.  Goya’s famous “Witch’s Sabbath” is a clear inspiration for the visual compositions as well as the costumes in the film. Welles frames Arkadin himself, but also many of the minor characters in such a way as to exaggerate their strangeness and unattractive qualities. This leads to an all-pervasive atmosphere that is both disconcerting and disorienting.

The film proceeds episodically as Guy follows the trail from one to another of Arkadin’s past associates. In each encounter, we are presented with weird and dark imagery, both blackly comic and disturbing. Van Stratten visits “The Professor,” a flea-circus trainer (Mischa Auer), and we witness the bizarre spectacle of him feeding his charges from his arm, and teaching them to perform tiny tricks. The scene ends with an enlarged view of his eyeball viewed through a magnifying glass, the most distorted close-up in a film filled with distorted close-ups. Guy also visits the cluttered and dingy antique shop owned by a man called Trebitsch (Michael Redgrave, in an inspired bit of kookiness). The jumbled shop recalls similar sets from Citizen Kane to The Trial and Touch of Evil, in which a claustrophobic and confused mood is amplified through the clutter visuals. When Guy visits Sophie (Katina Paxinou), Arkadin’s former lover and partner in crime, we have probably the most grounded emotional scene in the film. Even the verity of this sequence is undercut by the punctuation of the shot which concludes it—Sophie’s husband, a fat man with a stringy mustache filmed from a low angle. Van Stratten’s final encounter, with Jacob Zouk (Akim Tameroff), likewise plays as a sequence of black comic scenes leading to the conclusion of the film.

Somewhere in this strange mix as well is the brief scene of the penitentes , the Spanish villagers performing ritual penance. Van Stratten’s girlfriend Mily sneers at them as “crazy Klu Kuxers,” but Guy clearly recognizes that even in this ritual that is so alien to him, there is something profound about the need to divest yourself of the sins of your past. Here is another example, along with Macbeth, perhaps of the latent Catholic vision of Welles coloring the vision of his film. In the case of Macbeth, the setting was a given, but in this case, the Catholic milieu is not absolutely necessary. The rest of the plot has Guy jumping all over Europe, so this penitential imagery is deliberate, and of course the masked and hooded figures recall Arkadin’s own masks and hoods. While these sinners publicly mark their repentance, Arkadin tries to erase his sins by covering them up in murder, which leads to his ultimate humiliation in the eyes of the one person he cares for, Raina. One of Guy’s final acts, while trying to escape Arkadin, is to run into a church, seeking real or metaphorical sanctuary. He cannot hide from the devil who pursues him however, any more than one can hide from one’s past sins. The orderly march of the procession and the beauty of the church are brief, but potent counterpoints to the disorderly web of evil and deception that are given grotesque visual form through the rest of the story.

Arkadin seeks to erase with murder what can only be undone by the pardon of God.

Evil, in the form of Arkadin, and mirrored to a degree in Van Stratten, is always jealous and desirous of the good, the pure. Perhaps after all, the frog from Arkadin’s fable is Raina, who gives both men her love and is only bitterly poisoned by it. Welles shows images of Raina behind ornate window bars, an imprisoned princess. Her release from the game played by her father and would-be suitor will come at great pain to her. In the end, she descends from her captors not as a woman liberated, but crushed in spirit—stung as surely as the frog in the parable. But she was betrayed by not one, but two scorpions.

The victim of the grotesque game between Arkadin and Van Stratten.

This post is a part of the Great Villain Blogathon, hosted by the Speakeasy, Silver Screenings, and Shadows and Satin blogs. Please check their blogs, or the social media hashtag #Villains2016 for all the other great posts in the blogathon, and thanks for reading. 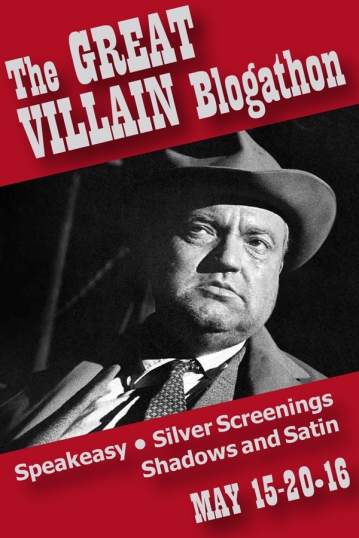