The most unkindest cut of all Doc Mifune’s life.

Akira Kurosawa’s 1949 film, The Quiet Duel, is one of his least seen works, partly due to some obscure rights issues that has kept it from being released by Criterion or any other major home video label. The lack of visibility can’t really be blamed for the lack of acclaim the film has generated: it is a relatively minor achievement for Kurosawa. But is still worth seeking out for any fans of the Japanese master filmmaker.

One might assume that the “duel” referred to in the title was between the two major stars of the film, Toshiro Mifune and Takashi Shimura, who had squared off the previous year in Drunken Angel, and would later famously be paired in such films as Seven Samurai. However, the title actually refers to an internal moral battle and struggle against a disease contracted by Mifune’s character in the course of his work as a doctor.

Dr. Kyoji Fujisaki is a surgeon who is operating under extreme conditions in a war zone during the Second World War. In the course of one of his operations, he grabs a scalpel on the wrong end, and cuts his finger, leading to him becoming infected with syphilis from the patient. When he returns home from the war, he joins the medical clinic of his father (Kurosawa regular Shimura), who is an obstetrician.  He has to hide the disease, fearing the shame of the social stigma that will result. He will not even confess it to his beloved fiancée (Miki Sanjo), not because he fears her rejection, but because he fears that she will wait for him for years until his disease is cured, thus causing her to waste her youth on him. 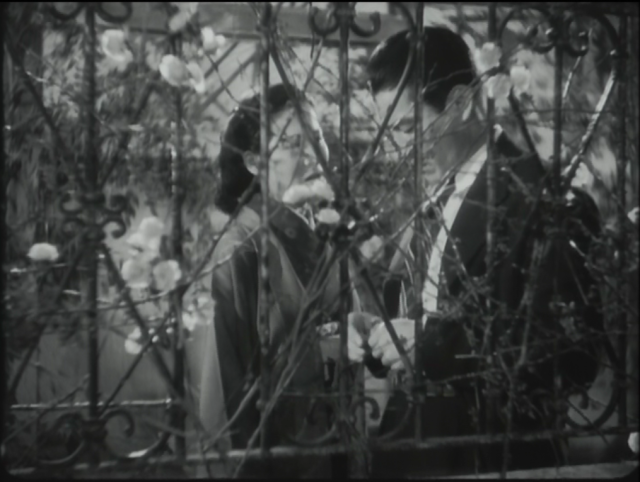 His love is more tangled in complications than the vines covering this gate.

Among the other subplots and characters, the nurse in The Quiet Duel has been abused and abandoned by the father of her child, and the poor of the neighborhood in the turmoil of postwar Japan come to the clinic for both healing and the ad hoc social stability that forms around the community there. The film is one of several of Kurosawa’s socially conscious modern-day and period dramas that examine the plight of the poor, sick, destitute, and those on the margins of society. In that sense, it is in a line with No Regrets for Our Youth, Drunken Angel, Stray Dog, Ikiru, The Lower Depths, High and Low, Red Beard, and Dodes’kaden, among others.  Red Beard and Drunken Angel further share the commonality of altruistic doctors working among the impoverished.  Even Seven Samurai, which isn’t the first film to come to mind when you think, “socially conscious,” is primarily about the injustices suffered by the underclass of peasants in society. Mifune’s character in Seven Samurai is revealed to be a peasant with aspirations to be in the Samurai class. The way that revelation unfolds is central to his character’s arc, and in making plain the difference in privilege and stature between the peasants and the Samurai. In The Quiet Duel, Mifune must similarly have a moment of revelation, where his character finally admits the battle that has been raging within his body, blocking him from attaining happiness with his beloved. His confessor is a nurse (Noriko Sengoku) that works in his clinic. She has observed him taking treatment for syphilis, and then overheard his admission to his father that he had the disease. But the battle against the disease is the easier one compared to the war against his own passion for the woman that he is convinced he must spurn. In an emotionally effusive scene, the doctor lays bare his struggle to the nurse, who herself is experienced in the dark side of the affairs between men and women. This scene was given one of Donald Richie’s terse dismissals in his evaluation of the film (in his book, “The Films of Akira Kurosawa“) where he says,

The sequence represents all it is supposed to: his renunciation, his agony, his renewed dedication—but the lack of tact, the inordinate length, the atrocious acting, all point to Kurosawa’s basic lack of interest.

Richie, an astute critic of many of the elements of film and an invaluable guide to those cultural elements in Japanese cinema that are alien to an American viewer like myself, nevertheless makes curiously curt appraisals of the acting in a couple of instances. I saw nothing “atrocious” about Mifune or Sengoku’s performances in this scene to deserve such a label. I am left wondering if there is something about the line readings in Japanese that escape someone who does not speak the language, or if he is merely objecting to the outward display of violent emotion in the scene. Even if you agree that the film, or any particular scene, is unsuccessful, that does not necessarily indicate a “lack of interest” on the part of the director. The case for Kurosawa’s lack of interest which Richie is refers to is based mainly on the fact that he had been forced by censors to change the ending of the film. In the original ending, Mifune’s character was to be driven mad by the syphilis. This was deemed medically unsound, and so a more resolute and heroic future was offered for the doctor, and the tragic arc for his character was transposed to the doctor’s love story. Richie argues that this change caused Kurosawa to be unable to carry through with full conviction, which is the underlying cause of the film’s weakness. This argument might have some merit, but using his criticism of the acting as evidence seems to overstate the case in my judgment by relying too heavily on a subjective and not clearly supported disparagement of the performances. MORE DOCTORS SMOKE CAMELS than any other cigarette

There are real charms in this film however, including some beautifully framed shots that linger in the memory, and especially a few graceful moments of interaction between the sagacious Shimura and Mifune as his tortured son. The moment where they both move to offer each other a light for their cigarettes gave me a good chuckle. Richie himself praises the wartime opening sequence, and the “pure beauty and ingenuity of the compositional setups” (again begging the question regarding Kurosawa’s commitment to the project).  All the films I can think of featuring both Mifune and Shimura give them a chance for their legendary chemistry, and this one is no exception, even if those scenes are fleeting in this movie. Hopefully The Quiet Duel will one day be released from the purgatory of rights issues that make it remain one of Kurosawa’s least seen, and more of us will be able to judge for ourselves. Even second-tier Kurosawa is better than many other directors’ best output.

This post is part of the Blind Spot 2017 series, hosted by Ryan McNeil at The Matinee.