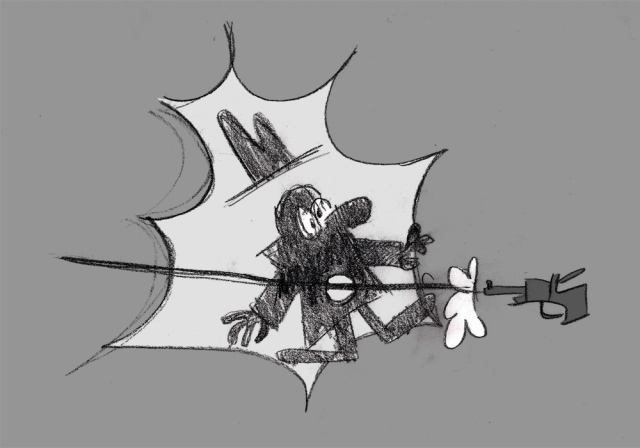 Greetings, loyal reader. You now have the singular opportunity to hear me talk about a film I have loved for a long time, A Shot in the Dark. Host Lady P. and her co-producer Martin Kessler graciously allowed me to pitch the film for inclusion into the Flixwise Favorites list. Flixwise is a podcast which in regular episodes makes its way through the Sight and Sound top 250 films list. On the Favorites episodes, they set aside that venerable and canonical list and turn to other, perhaps more neglected or less critically praised films, and discuss whether they should be honored as Favorites by the podcast. Take a listen to my pitch on A Shot in the Dark  to see if Lady P. and Martin find one of my favorites a Favorite of the podcast.

What follows is an expanded and revised version of what I pitched on the podcast, summarizing my feelings about the film. 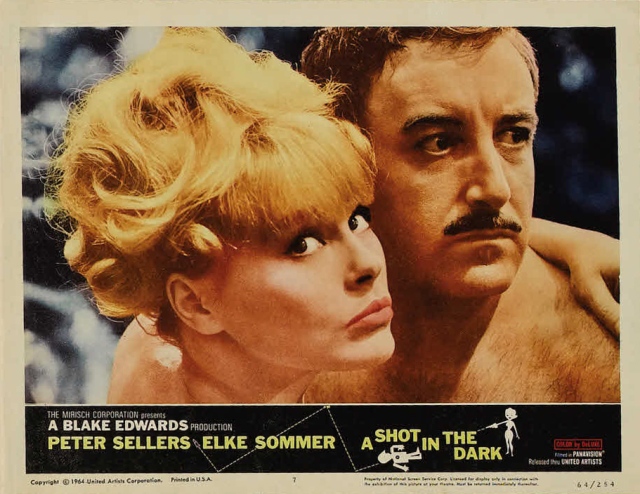 The second film in the classic Pink Panther series, A Shot in the Dark, is also the funniest and best of the series starring Peter Sellers as the bumbling Inspector Clouseau. This 1964 film features Peter Sellers at the absolute peak of his career, coming just a year after The Pink Panther and, incredibly, in the same year as both Dr. Strangelove, where he famously played three complete roles, and another lesser known film, The World of Henry Orient. A Shot in the Dark was adapted loosely from the stage play of the same name, itself an adaptation from the French version, titled L’Idiot. The play was rewritten to accommodate Sellers’s character as the epically incompetent inspector who investigates the central murder mystery.

Perhaps the first gag in the film isn’t really in the film. The first film in the series, The Pink Panther, ended with Clouseau headed to jail, suspected of being the cat burglar that stole the “Pink Panther” diamond. In A Shot in the Dark, he has been returned to the force without any explanation. This won’t be the last time that his unorthodox policework lands him in jail, only to be released and placed back on the case. It’s one of the film’s best running gags. But I’m getting ahead of myself. 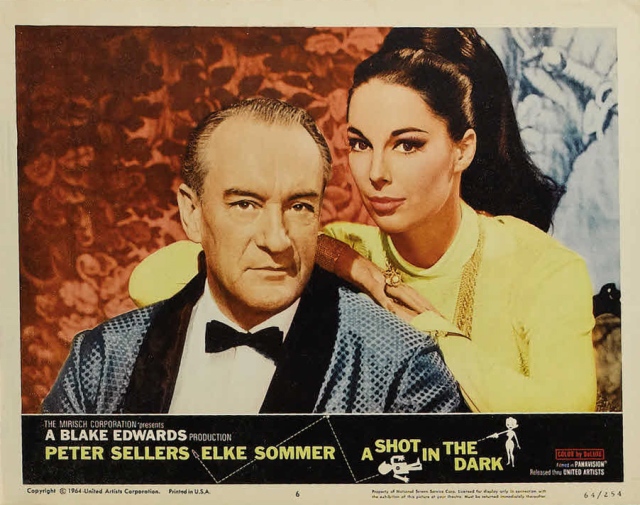 The basic plot is as follows: at the home of millionaire Mssr. Ballon (played by the unflappable George Sanders), everyone is having affairs with everyone else. One night, as all the servants and residents are sneaking about from bedroom to bedroom, shots are fired. Maria Gambrelli (Elke Sommer) is found with the gun in her hand, still smoking, standing near the body of her lover, the chauffeur Miguel. Clouseau is assigned to the case, against the protests of Chief Inspector Dreyfuss (Herbert Lom). When he arrives at the mansion to investigate, Clouseau is immediately smitten with Maria, and refuses to believe that she could have committed murder. His plan to uncover the true murderer revolves around releasing Maria from prison, and following her with increasingly absurd surveillance plans and disguises, seeking to trick the true murderer into revealing themselves somehow. Instead, when she is released, another body turns up, and again Maria is present at the crime scene. Clouseau is undaunted and releases her again and again, each time with the same results. Still, he follows the logic of the heart to its inescapable conclusion—a dénouement whereby he (accidentally) reveals the guilty party—almost everyone from the Ballon mansion!

During the investigation, we also meet for the first time, Clouseau’s servant Kato, played by Burt Kwouk, whose job is to answer the phone, lay out Clouseau’s clothing, and also attack him at the moment he least expects it. This film really set the template for the later, much goofier sequels, by improving on the rather dull pacing of the first film, and of course, by making Sellers the star. The balance of broad and subtle comedy in this film is exquisite, and every cast member is an absolute gem. George Sanders is a straight man for the ages, especially in the hilarious scene where Ballon and Clouseau match “wits” over an ill fated game of billiards. Elke Sommer brings a chipper innocence to her portrayal that makes Clouseau’s bizarre and misguided attempts to woo her while proving her innocence incredibly funny. Writer-director Blake Edwards, known later for edgier fare, here is restrained in his presentation of very adult subject matter, (murder, affairs, nudist camps…) but the comedy is all the better for it. Along with co-writer William Peter Blatty of Exorcist fame (!) they work within the bounds of what we would today call a PG level of content, to keep the tone light and breezy. I had never made the connection that Blatty was a co-writer on the film, until just before we recorded the podcast, which was only days after Blatty had died. 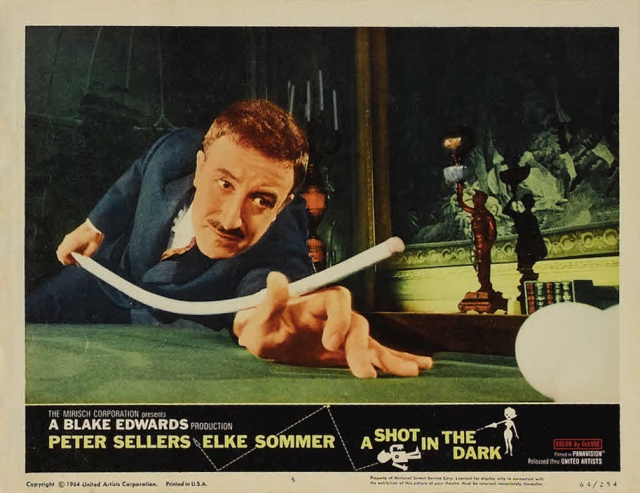 This is the kind of film that very rarely receives the sort of critical acclaim that somber, weighty films will, or even musical comedies. But nevertheless, this film is one of the greatest screen comedies of all time, with one of the best performances by the master of 20th century screen comedy, Peter Sellers. This film is the best version of what is probably his signature role. From the physical comedy of getting his hand stuck in a globe, or navigating through a nudist colony with only a guitar to keep him discreetly covered, to the verbal banter marked by his convoluted logic and intermittently distorted French accent, Sellers makes Clouseau into one of the most beloved comic figures in screen history. The great script, with endlessly quoteable lines (“Careful, you fool, you’ve broken my pointing stick. Now I’ve got nothing to point with!”) and the visual gags, punched up by Henry Mancini’s playful, cartoony score bring laughs on the first viewing. But the fact that repeat viewings bring even more laughs, as you discover the subtle moments of comedy that grace Sellers’s performance like a finely choreographed ballet. Notice how Clouseau becomes frustrated as the butler keeps returning his hat to him, upon his entrance into the Ballon mansion for the first time (after he had first fallen into the fountain in front of the house, of course). Or the way that he removes one of his wet gloves, then immediately shakes hands with the other, still gloved hand, as a squishing sound is heard. 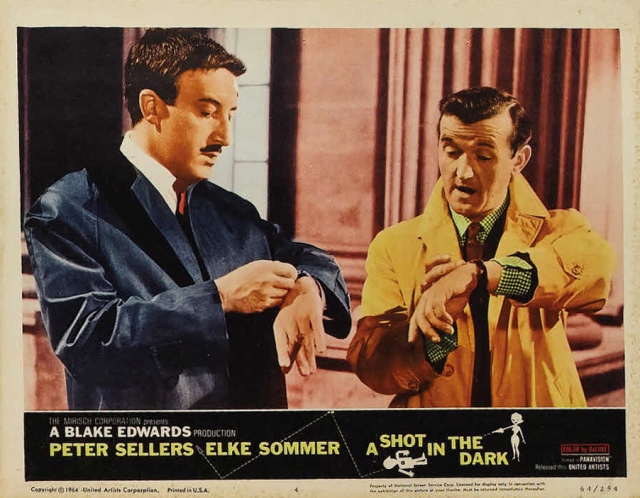 So there is great pleasure in the laughs, but does that make it a great film? Does a comedy need to make a satirical statement about serious political or social matters, like Kubrick’s Dr. Strangelove, in order to be great? I suppose you could argue that there is a critique of the vanity of wealth, and the corruption of the legal system and the police, and the inherent absurdity of seeking justice in a topsy-turvy world full of heartless people and ruled by the influence of rich elites. But I think the greatness is even simpler than that.

As Michael Chabon argues in his book of essays, Maps and Legends, entertainment should “encompass everything pleasurable that arises from the encounter of an attentive mind with a page of literature,” or in this case, a film. He makes the case that this kind of entertainment is “the only sure means we have of bridging, or at least of feeling we have bridged, the gulf of consciousness that separates each of us from everybody else.” In this film we see that despite the absurdity of the plot, a classically comic happy ending results, where love and innocence are vindicated, corruption is foiled, and good intentions suffice to cover inadequacies of competence. As we laugh at these events, we recognize the inherent humanity in all the character types we see on screen, and we can see what of those foibles in those most superficially different from is yet present in ourselves. Ultimately, to laugh at them is to laugh at ourselves, if we are honest, and that’s a healthy thing.

7 thoughts on “A Shot in the Dark – Flixwise Favorites”