All hail, Macbeth, thou shalt be king hereafter!

Orson Welles’s adaptation of William Shakespeare’s Macbeth is a fascinating and partially successful experiment in translating the play from stage to film. Welles of course had a background in both theater and radio, and the legacy of both of those realms of experience is evident in his ambitious adaptation. What follows are some notes on my first viewing of the film, along with some insights drawn from Peter Bogdanovich’s interview book This is Orson Welles (edited by Jonathan Rosenbaum, 1992), and from the invaluable Wellesnet.

Welles had staged Macbeth more than once before making his film version in the late 1940s. Most famously, he directed an all-black cast in the so-called “Voodoo Macbeth,” in 1936. This was one of his most influential examples of recasting the setting of a Shakespeare play. He also made theater history with the starkly expressionistic Julius Caesar, which conveyed an anti-fascist message through costumes and staging that evoked contemporary European events. In one of the surviving photos of the “Voodoo Macbeth” production, you can see a marked resemblance between the play’s set and the set of the film. Structurally, they are quite similar, with the ramp leading up to the upper chamber which dominates the background. Welles’s film version is clearly made on a tight budget, which is reflected in both the limited set and costumes, but he plays with these limitations mostly to good effect. He employs expressionistic shadows and camera angles in the odd cavern-like castle, and foggy non-landscapes for armies and horses to wander through ominously. You’ve heard the saying, “he has a face for radio”? Well, this is a film image for radio.

It has always been a standard practice to pre-record dialogue for animated films, and many (particularly Italian productions) movies were filmed with the intent of dubbing all the dialogue in post-production. Welles’s own Chimes at Midnight was post-synched, and he reportedly redubbed the lines for most of the minor characters in Mr. Arkadin. This film, however, has a strange history with regards to the dialogue track. The film was completed very quickly, in only 23 days of shoting. As Welles explained in conversation with Bogdanovich:

PB: You prerecorded the dialogue?

OW: Not just for reference, as we did in [The Magnficent] Ambersons. We actually acted to a playback. That meant the technicians could be roaring out instructions about where the crane went, and clattering and howling away off camera, while we were busy getting on with the filming. A foolish way to work, but on that schedule it was the only way we could have got it made. We all got pretty good at following the records.

In addition to this unique way of working with the dialogue, the prerecording was done with a Scotch “burr,” something that is surprisingly unusual for the “Scottish Play.” However, in previews, the accents were disliked and deemed to be too difficult to understand. And so, after toying with re-dubbing just certain portions of the dialogue, it was ultimately decided to re-do the entire film in more standard accents, along with making around 20 minutes of cuts. I have not seen this version, but it is hard to imagine that the film could function well with so much editing. It is already very briskly paced in the longer version, and conveys only the essential aspects of Shakespeare’s text. As an article at Wellesnet opines:

Ironically, watching the film today, the whole hysteria over the Scots accents seems a bit mysterious. Most viewers who have either the old VHS tape of the movie, or a foreign DVD of the 107-minute long version of the film find the Scots accents perfectly understandable. It appears in 1948, though, a few bad notices were enough to drive Republic executives into panic mode, resulting in a delayed release of almost three years, which in the end, made very little difference in terms of the final box-office results.

Another outstanding feature of the film’s style is a liberal use of voice-over narration. It’s possibly a concession to the difficulty of syncing with the original pre-recorded dialogue, but it is also a way to make long monologues and soliloquies feel less psychologically artificial when on camera. My favorite of the long speeches, which where Macbeth speaks of “a tale told by an idiot, full of sound and fury, signifying nothing,” is spoken over imagery of roiling clouds or fog. I think another source of this technique may be Welles’s past experience in radio. He knew well what he could accomplish dramatically with only words. 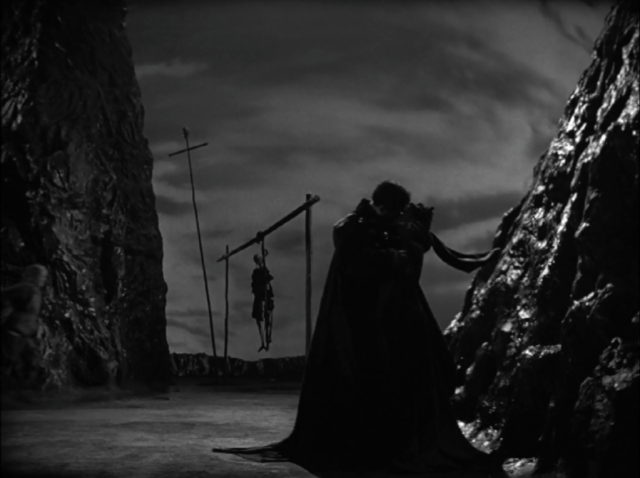 Lady Macbeth (Jeanette Nolan) is played in a more sensual way than I recall seeing before. Welles even stated that he “wanted a sexpot,” and had tried to get Vivien Leigh for the part. She greets Macbeth with a quite passionate kiss upon her first meeting with him. In other performances, she is often played with a purely imperious coldness that makes her scheming on behalf of her husband merely calculating. Here it seems to be born of a hot-blooded passion for not just power, but for her husband as a man. Her imperative (placed by Welles in two scenes) of “to bed, to bed,” is made to be addressed to Macbeth himself in both instances, and is given a subtly seductive implication, rather than a mere warning to get some rest. I think that these emphases give the character more depth of feeling than in some interpretations. It is clear that her desire for advancement is of a piece with her desire for her husband, and that makes her ultimate breakdown more convincing.

When questioned about his religion, Welles once reluctantly admitted to Peter Bogdanovich that he was raised Catholic, and he quoted an aphorism, “once a Catholic, always a Catholic, they say.” Of course Welles was not a practicing Catholic, but Macbeth may represent the clearest expression of his repressed religious upbringing. As he told Bogdanovich,

The main point of that production is the struggle between the old and new religions. I saw the witches as representatives of a Druidical pagan religion supressed by Christianity–itself a new arrival. That’s why the long prayer of Saint Michael (not in Shakespeare at all)–that’s why the screen is constantly choked with Celtic crosses. These people are holding off not just the forces of darkness but the old religion, which has been forced underground. The witches are the priestesses. Nobody ever paid attention to that. The whole device of the picture is based on the struggle between two religious systems.

Macbeth challenges the advancing army by throwing his demonic spear down and killing the priest. If it wasn’t clear enough at this point that Macbeth represents the forces of the pagan religion, he goes so far as to chop off the cross from Macduff’s helmet in their climactic duel. Macbeth’s war-crown, which Welles himself mocked as looking like the Statue of Liberty, is shot in closeups to appear almost as devil-horns. It’s a striking and persuasive reading of the text, and in particular gives a more clear motivation for Macbeth’s desire to fulfill the witches’ prophecy (or, as Welles would have it, their “ideas which make things happen”).

Along with a rousing score by famed French composer Jacques Ibert, the film features strong performances by all the cast, but in particular Jeanette MacDonald and Welles himself. His characteristically bold  direction was complemented by the black and white cinematography of John Russell, mostly known later for TV work, but also for Hitchcock’s Psycho. Overall, while compromised in some ways by the budget limitations, Welles retained control of the project in a way that he was unable to for far too many of his movies. So this film must be considered one of the most fully realized expressions of Welles’s vision for a project from his whole output.

Who ya gonna call?

Hopefully at some point the Criterion Collection will pick this film up and give it the treatment it deserves. It would be fascinating to see both this version and the redubbed theatrical release version for comparison, and to have some proper supplements to place the film in the context of Welles’s work and of the history of Shakespeare on film.

This post is part of the Blind Spot Series, hosted by The Matinee blog.