I had the rare privilege of seeing Stanley Kubrick’s 2001: A Space Odyssey in the “unrestored” 70mm film projection, which proved to be one of the top two theatrical viewing experiences of my life so far. I was inspired to immediately request Michael Benson’s new book, Space Odyssey, on the making of the film. Having neither read it, nor Arthur C. Clarke’s parallel novel, these notes reflect my questions based solely on the text of the film, and my familiarity with Kubrick’s other films.

The films of Stanley Kubrick often depict war, human brutality, and the ways that violence interpenetrate our social structures. I venture to say that 2001 is probably not thought of in terms of those themes primarily, or very often. (I welcome anyone pointing me to writing along those lines, though!) The bloodless expanses of the film still contain moments that indicate that Kubrick is considering these themes in new dimensions, and perhaps more obliquely. Kubrick folds them into brief scenes of action that are layered among long sequences of slow-moving beauty, accompanied with music borrowed from Strauss, Strauss, and Khachaturian.

The dawn of Man?

Kubrick employs the most conventionally distressing and dissonant music (from Ligeti) to provide the theme for the awe-inspiring obelisks, themselves the symbolic or actual spurring into the next stage of human advancement. It was fascinating to me to see that the evolutionary advance prompted by the proto-humans’ encounter with the obelisk led to the discovery of the first tools, yes, but tools that were immediately put to violent use. Technology, in this myth, is at its inception a product and means of death: the tools are weapons made of bone. The weapons are not only used for hunting game though, but are immediately used to threaten a rival tribe, and then murder its leader. The famous jump-cut image from bone to satellite, while drawing attention to man’s leap in technological power, also suggests that even benign technology (a satellite) may not be morally neutral, or at least that humans inevitably corrupt technology to violent ends.

If, in the mythology presented in 2001, humans required an alien intelligence to help them advance to the next stage of evolution, with the Star Child transformation presumably the ultimate end, what is to suggest that humanity, even in the evolved state, will not continue to practice domination through violence and deception? Are we, in the story of 2001, formed over the course of evolution into the image of extraterrestrial intelligence, rather than made in the image of God? Survival of the fittest cannot be its own justification on a moral level, but the aliens that guide humanity don’t seem to offer an alternative.

Humanity’s own attempt at creating a more transcendent intelligence, HAL 9000, a perfect and flawless realization of mankind’s technological aspirations, is revealed ultimately to be paranoid, insane, and murderous. Truly a being created in man’s image. Does this point toward an answer to the question of whether the film sees technology itself as inherently morally corrupt? Again, if the alien intelligence prompting the development of humanity point toward a higher form of existence, why is it that the enlightenment of the obelisk produces only more efficient means of violence?

Significantly, perhaps, when the Star Child arrives back at Earth, he does not do so by means of a spaceship or any recognizable form of technology. He is a new form of Man, naked and illuminated from within. During the poetic final sequence in the white room, the technology that allows Dave to have traveled “beyond the infinite” is gradually stripped away, as first his pod and then his spacesuit disappear.

Even if we take this to mean that humanity has to transcend the limits of technology to realize their evolutionary potential, can the brutal journey be justified, one that is red in tooth, claw, and silicon processor? I assume that the team of Clarke and Kubrick are telling this story from the point of view of a Godless universe, but I’m not one who conflates atheism with an amoral outlook. It may just be another example of the deeply ingrained irony present in his other films. Whether it is droll social commentary as in Barry Lyndon; violence pushed to the point of absurdity as in Dr. Strangelove; a depiction of doomed injustice yet tinged with hope, as in Paths of Glory or Spartacus; or even the caustic and horrifying vision of several other films, the ironic mode permeates Kubrick’s stories. The irony seems to be subtler here, yet no less integral to the structure of the story. Does the destiny of humanity, our desire to ascend to the heavens, require us to deal in murder and violence to reach our full potential? Whether we believe in God, in a guiding alien intelligence, or in mechanistic evolutionary processes alone, the never-ending violent struggle among humanity is a fact that must be accounted for.

The concluding section of 2001 enters an abstract cinematic language that nothing leading up to it has really prepared us for. It seems to be a yearning for the spiritual ascension of humanity, much as what preceded it depicts the physical and intellectual ascension through the long process of time and (assisted) evolutionary processes. Twice earlier in the film birthday celebrations are depicted, foreshadowing the birthday of the Star Child that will conclude the film. The dazzling and hallucinatory images that lead us to the emergence of the new Man, along with the triumphant return of the portentous Strauss theme, underscore an ironic question that is left, I think, open ended. Does this birthday, midwifed by unknown and inscrutable intelligences, bring forth the attainment of innocence and enlightenment, or is this new dawn of man a prelude to the next cycle of violent development, proceeding into the infinite future? 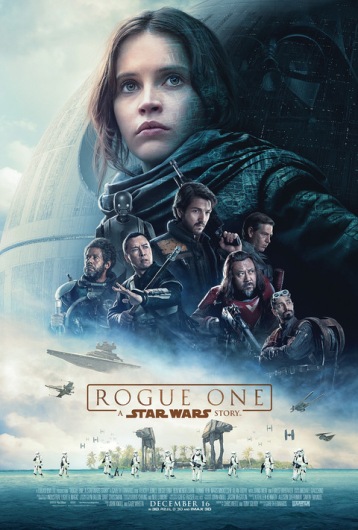 Is it really a story worthy of Star Wars?

I typically don’t post reviews of current films, but as a long time Star Wars fan, I wanted to put down some thoughts on Gareth Edwards’s new entry in the film canon, and the first standalone film (assuming you don’t count the 2008 animated entry The Clone Wars): Rogue One. So here we are!

I read Steven Greydanus’s review for his site, Decent Films, prior to seeing the film, in which he persuasively argues that this new film, subtitled “A Star Wars Story,” is a major change in the mode of the storytelling from the numbered Episodes of the main Saga. There is a shift from the fairytale like quality of the original trilogy, into a slightly more mainline sci-fi style. Not only is the violence more visceral than in most of the films, but also the heroes and even possibly the Rebel cause itself, are tainted with war crimes and murders that are made a central part of the story. The mythic mode of storytelling has had the bright lines between the “good guys” and “bad guys” smudged. For some, this is a welcome change, a more “realistic” look at the horror of war. For Greydanus, it’s basically a dealbreaker, in that he feels this form of storytelling betrays what is essential about the original Star Wars fantasy, with its archetypal presentation of the story of the triumph of purity and idealism over the evil forces of mechanical domination.

I found myself in neither camp, really. Years of dipping  into the well of the now-defunct Expanded Universe off and on has primed me for an incredible variety of storytelling modes set in this universe that, God help me, I can’t help but love. Greydanus’s argument that the core, canonical (film) stories are betrayed by Rogue One in a way that wasn’t the case with the peripheral books and comics is legitimate—and nagged at me—but I still found more to appreciate than he did.

END_OF_DOCUMENT_TOKEN_TO_BE_REPLACED

Steven Lisberger’s 1982 cult Science Fiction adventure, TRON, is a fun exercise in visual storytelling. It is the fantastic tale of a man who is beamed into the electronic world of the computer, where he is forced to survive against the villainous Master Control Program by playing video games against other enslaved programs. On the level of the computer world, the programs look like people with glowing circuit covered tracksuits and helmets. Lisberger was aiming to make a searching statement about the spiritual relationship between humans and the machines we create.  By employing the most state of the art computer generated and hand-rotoscoped animation techniques of its day, TRON explored the theme of the interpenetration of the human spirit with our technology. Something of us is in each program we create, but conversely, our technology reaches out to transform and shape the society we live in, and the individuals who make it up.

END_OF_DOCUMENT_TOKEN_TO_BE_REPLACED

“It was a pleasure to burn.”

With those words, Ray Bradbury opens his 1953 novel, which still startles with the wisdom of its warnings over a half-century later.

François Truffaut adapted Bradbury’s novel into a film in 1966. The novel and film are centered around the story of Montag, in an unspecified future time where firemen are called to burn books, and their dangerous ideas, rather than put out fires.