Welles as Othello, and MacLiammoir as Iago

I waited a long time to finally watch Orson Welles’s Othello, in order to see it in fully restored glory on Criterion’s new Blu-ray release. Othello is the second of three great Shakespeare adaptations that Welles created, between Macbeth and Chimes at Midnight. Whereas Macbeth was created on the low budget studio lot of Republic Pictures, and filmed rapidly in under a month, Othello was filmed almost entirely on locations in Europe and Africa, and was to take over 3 years to complete filming and post-production. Very different sets of difficulties presented themselves in making a studio picture versus an essentially guerrilla-style independent film, but the result was to be the harbinger in many ways of developments in his style that would result in films as varied as Mr. Arkadin and his later masterpieces The Trial, Touch of Evil, and Chimes at Midnight. While it does not reach the heights of that latter trio of films, it is nonetheless a worthy visual meditation on the core of Shakespeare’s great tragedy.

I say, “visual meditation,” because what is most striking about this version of Othello is not the power of the poetry (as one might expect from the gifted orator Orson Welles), but the primarily the power of the imagery. In scene after scene, Welles takes us through the emotional core of Shakespeare’s story, while taking out many of its most celebrated (and also its most controversial) lines. Despite being forced to piece together a patchwork of shots filmed literally across thousands of miles and years apart, there is a remarkable visual consistency, and a thematic unity to the black-and-white imagery. I cannot disagree with Welles scholar James Naremore, who wrote, “Of all Welles’s films, Othello is the one for which the adjective ‘beautiful’ is most justified.”

END_OF_DOCUMENT_TOKEN_TO_BE_REPLACED

An attack, or playful flirting?

I had the privilege of revisiting Alfred Hitchcock’s 1941 thriller Suspicion with my daughter this week. The film is a fascinating example of Hitchcock’s work, because though it is often seen as a weaker entry in his filmography, I find it to have some of the most startling possibilities for a viewer of any of his films. Most of his films wrap up with a neat finish, whether tragic or triumphant. This one presents ambiguities that are not really resolved, right up to the final moments of the film. The film is a psychological examination of an unhealthy marriage, with an ending that is dramatically different from the novel that it was based upon. The way we interpret that ending can be quite different, however, depending on what perspective we bring to the film, as I discovered while discussing the film with my daughter after our viewing.

Suspicion is the first of four films that Cary Grant would make with the Master of Suspense. He would go on to star in my favorite Hitchcock film, Notorious, as well as To Catch a Thief, and finally North by Northwest. The story is based on the novel Before the Fact, by Francis Iles, and tells the story of a young, bookish woman named Lina (Joan Fontaine) who impetuously falls in love with gadfly, socialite, and playboy Johnnie Aysgarth (Grant). The two marry, and it soon becomes apparent that he his charm and seductive manner covers over his lack of means: his “wealth” is an appearance built out of gambling windfalls and friendly loans, and eventually theft. François Truffaut summarized the scenario, and how it differs from the source material in this way:

END_OF_DOCUMENT_TOKEN_TO_BE_REPLACED 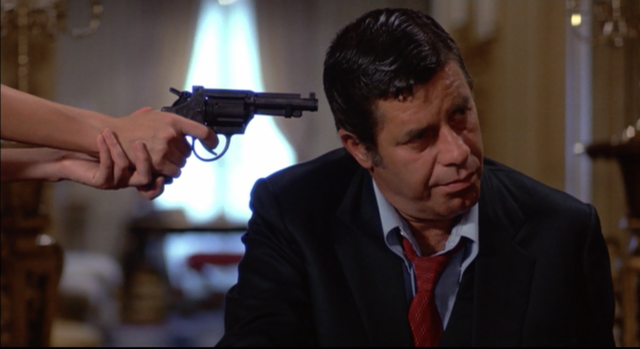 Martin Scorsese has said that he did not originally want to make The King of Comedy (1983) when it was first presented to him by Robert De Niro—he “didn’t get it.” But, as he has explained in a couple of retrospective interviews, he eventually came around to understanding the script. The story follows the improbably named Rupert Pupkin (De Niro), who wished to make it big as a stand up comedian on the Jerry Langford (a brilliantly simmering Jerry Lewis) late night show. When Langford brushes off the unproven Pupkin, Pupkin’s attempts to gain Langford’s attention grow more desperate, culminating in him kidnapping Langford along with his equally obsessed and unstable friend Masha (Sandra Bernhard).

Scorsese told critic Richard Schickel (in his interview book, “Conversations with Scorsese”) that at first, he thought that it was “just a one-line gag: You won’t let me go on the show, so I’ll kidnap you and you’ll put me on the show. Hmm.” But he later began to see what De Niro saw in the script by Paul Zimmerman: the way celebrities like De Niro have to deal with “the adulation of the crowd, and the strangers who love you and have got to be with you and have got to say things.”

END_OF_DOCUMENT_TOKEN_TO_BE_REPLACED

Fragmentary impressions of a silent masterpiece, The Passion of Joan of Arc (1928), directed by Carl Th. Dreyer, and starring Reneé Falconetti as Joan:

END_OF_DOCUMENT_TOKEN_TO_BE_REPLACED

It is probably not best to view a parody before you see the original work that is its subject. But in this case, I think no harm was done. I laughed out loud the moment I recognized the music that underscored the crane shot in the opening sequence of François Truffaut’s Day for Night (1973), having first heard it in this silly gem of an American Express commercial by Wes Anderson. Anderson, noted for his admiration of Truffaut along with other filmmakers, has no shame in pilfering shots, music, or other elements from films he admires. You can also hear the same music cue in the trailer for Day for Night (pardon the unfortunate English dub). Anderson even riffs on the scene where Truffaut’s character has to choose from a tray of guns needed for a later scene, as he gives us his tongue-in-cheek homage to Truffaut’s behind the scenes look at filmmaking.

END_OF_DOCUMENT_TOKEN_TO_BE_REPLACED 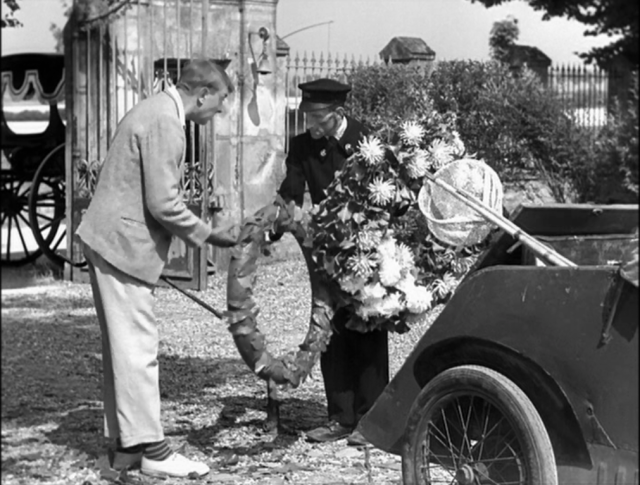 One for the deceased gentleman, and one for his hearse.

Jacques Tati’s second major film as a director, Les Vacances de Monsieur Hulot (M. Hulot’s Holiday), was released in 1953. This was the first to feature the character of Monsuier Hulot, a quirky everyman, who jauntily bumbles his way through a series of humorous episodes. Usually, the humor comes from Hulot’s unselfconscious way of disrupting the order of his environment, merely by being himself.

The obvious comparison for Tati, from my experience, is Chaplin. Just as in the films of the famous silent comic, Jacques Tati is the total filmmaker: a writer-director-actor who controls all the elements of his production. He has also created a comic persona in Monsieur Hulot, that—like Chaplin’s little tramp—is one of the great and iconic contributions to cinema. I have heard so much about the work of Tati, and now that I have finally seen the first of his films featuring M. Hulot, I know that the consensus is right—Tati is among the greatest filmmakers in world cinema history, and I am very excitedly looking forward to experiencing his other films. END_OF_DOCUMENT_TOKEN_TO_BE_REPLACED

What lingers in the mind is the color. A reddish-pinkish hue, the hue of dying embers. And the glow of the fireflies who rise up with a dreamy slowness like sparks floating upwards. The fireflies die quickly—their lifespan may be a season—and they are easily crushed even by a small child, which is a giant to them. Children, like the fireflies, are also the victims of forces much larger than them—war, hunger, the banality of bureaucracy, the general indifference of the adult world.

END_OF_DOCUMENT_TOKEN_TO_BE_REPLACED 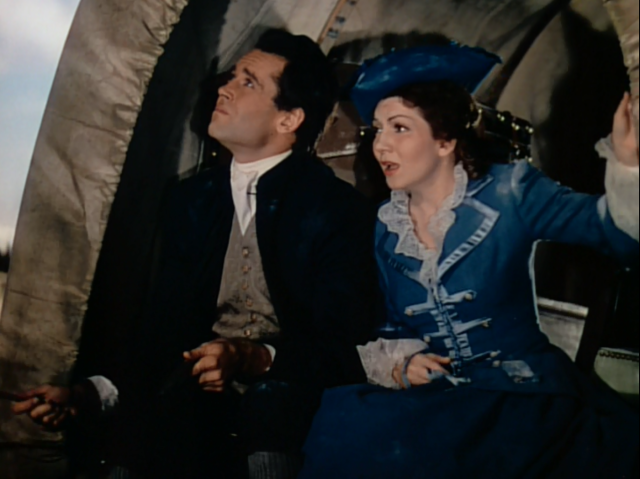 In Frank Nugent’s original 1939 New York Times review of John Ford’s Drums along the Mohawk, he observed, “The Revolutionary period, oddly enough, has been one of the least exploited epochs in our national history—by the screen, that is…” If we are discussing war movies, I would add World War I to the list under-served by the cinema. While we seem to get a new movie about World War II almost every year, these pivotal eras are rarely charted by filmmakers. So it is with great interest that I took a look at Ford’s film, which stars Henry Fonda and Claudette Colbert as a pair of newlyweds trying to make a life in the frontier when war against the British breaks out around them.

It’s not really a war movie properly speaking, but like most of Ford’s best loved pictures, a story of a family and a community. There are some battles, but most of them are off screen, or only spoken about. Ford is more concerned with the aftermath of the battles, and even the preparation for them, than on rousing footage of the actual skirmishes. The focus remains on the ways that the encroaching realities of war shapes and transforms a community. As one of the few wars fought on our own soil, this sort of story is very different than the ones where soldiers bleed and die across the ocean. Homes are burned by Indians allied with the British. The women and children of the frontier are forced to retreat to the relative safety of the nearby fort, abandoning their homes and lands. The militia is formed from the able bodied of the area, and drilled in preparation to defend the territory.

END_OF_DOCUMENT_TOKEN_TO_BE_REPLACED

Are you now? Or have you ever been?

Dystopias never really go out of style. Since at least the early 20th century, every generation produces its fair share of dystopian literature and films. It seems that regardless of the political climate we live in, it is possible to detect the seeds of what might grow into a future where society is a frightening place. Artists seem to feel the need to express their discontent with contemporary trends through these futuristic nightmares, and readers and audiences continue to show an appetite to experience these brave new worlds. One of the earliest epic science fiction dramas was Fritz Lang’s Metropolis, a dystopic silent film that has influenced countless films since. Two of the best known novels in this mode, Orwell’s 1984, and Huxley’s Brave New World, have served as models and inspirations for many of the dystopias which followed, up to the recent Hunger Games series.