In Frank Nugent’s original 1939 New York Times review of John Ford’s Drums along the Mohawk, he observed, “The Revolutionary period, oddly enough, has been one of the least exploited epochs in our national history—by the screen, that is…” If we are discussing war movies, I would add World War I to the list under-served by the cinema. While we seem to get a new movie about World War II almost every year, these pivotal eras are rarely charted by filmmakers. So it is with great interest that I took a look at Ford’s film, which stars Henry Fonda and Claudette Colbert as a pair of newlyweds trying to make a life in the frontier when war against the British breaks out around them.

It’s not really a war movie properly speaking, but like most of Ford’s best loved pictures, a story of a family and a community. There are some battles, but most of them are off screen, or only spoken about. Ford is more concerned with the aftermath of the battles, and even the preparation for them, than on rousing footage of the actual skirmishes. The focus remains on the ways that the encroaching realities of war shapes and transforms a community. As one of the few wars fought on our own soil, this sort of story is very different than the ones where soldiers bleed and die across the ocean. Homes are burned by Indians allied with the British. The women and children of the frontier are forced to retreat to the relative safety of the nearby fort, abandoning their homes and lands. The militia is formed from the able bodied of the area, and drilled in preparation to defend the territory.

You can see it on the look on Fonda’s face: “Why am I surrounded by these bozos?”

The famous Ford stock company of actors fills most of these minor militia and frontier-folk roles, including the ubiquitous Ward Bond, Arthur Shields, Jack Pennick, Ford’s brother Francis, Russell Simpson, and John Carradine as the eyepatch wearing villain. Some critics, including Ford biographer Scott Eyman, have been less than impressed with the performance of Colbert in the role of the wealthy daughter who begins life in a log cabin with her new husband. Eyman suggests that Colbert’s “innate stylishness feels too artificial for a Ford film,” but I feel that her casting was excellent, and that she conveyed the sensibilities of her character’s uncomfortable position with a convincing determination. In the other starring role, Henry Fonda, gives an adequately stalwart performance, coming fresh out of providing an portrayal of Abe Lincoln, and just before his greatest role for Ford as Tom Joad. 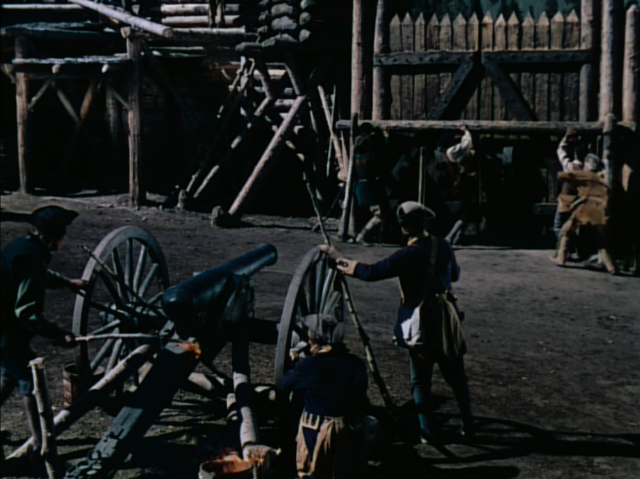 This film will never enter the canon of Ford’s masterpieces.

To me, the reason that this film doesn’t hang together centers around the use (misuse, really) of the stock company roles. It’s no secret that Ford was given to inserting sequences of broad comedy, which for many viewers are unpleasantly unfunny and off-putting in principle. For myself, I feel that these sequences can be charming and effective when they work (pretty much all of The Quiet Man), perplexing when they provoke a major shift in tone (the “Look” scenes in The Searchers), or downright confounding when they fall flat, as in this film. Ward Bond, one of my favorite character actors, is actually irritating in every frame he appears in here. The Keystone-Cops-like antics of the bumbling militia fail to provide the humanizing foibles that serve to balance some of his other dramas. Unlike some other similar comic sections, I can’t find much dramatic justification for the clowns in this picture. Rather they might make a patriotic American wish that the British had won the day. Only Edna May Oliver as Mrs. McKlennar, the stubborn and wealthy widow, manages to create a humorous character that still delivers a dignified performance. Edna May Oliver comforts a shell-shocked soldier in the aftermath of a rain-soaked retreat.

This film was made during a remarkable stretch between 1939 – 1940 which began with Stagecoach, then proceeded to Young Mr. Lincoln, Drums Along the Mohawk, The Grapes of Wrath, and The Long Voyage Home. In my judgment, Drums stands out among this bunch, not only as the only color film (Ford’s first), but as the weakest visually and in terms of overall effect. There are some unconvincing day-for-night effects in the climactic battle scenes, and a general dull look to the images, which in fairness may be attributable to the DVD transfer more than to the original cinematography. The sequence where the soldiers march home from battle in the rain is memorably beautiful, however. 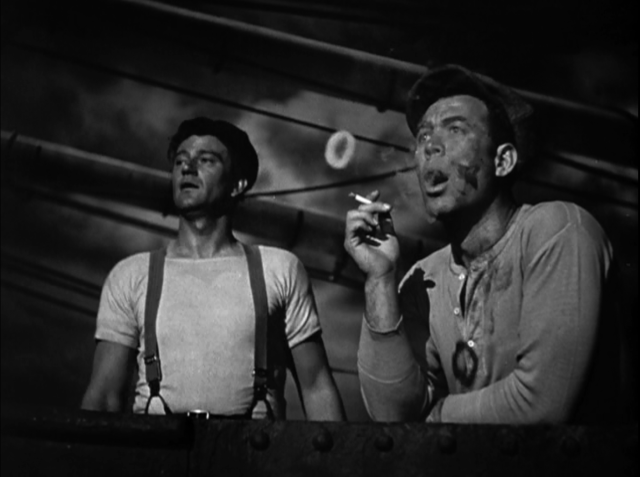 You may be cool, but you’ll never be as cool as Ward Bond upstaging John Wayne while blowing smoke rings.

The shortcomings of the film are made more evident when you compare it to The Long Voyage Home, where there is a much more effective use of the Ford regulars, and the stunning black-and-white photography of Gregg Toland elevates the artistry of the picture to another level. This film shares some common themes with Drums, despite a very different setting—mostly onboard a merchant ship in the North Atlantic on the brink of the Second World War. Anxieties about the Germans lead the crewmen to both band together in a makeshift society made of men from all over the world, but also to be suspicious about anyone with suspected ties to Germany. This is all handled with more subtlety and psychological nuance than the way the frontier community is shown hunkering down under the haranguing of the town preacher. 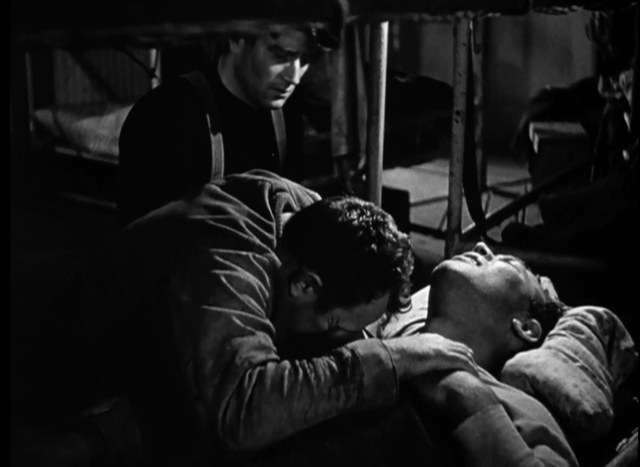 Ward is much better in a serious role here, and is rewarded with a great death scene.

The Long Voyage Home is filled with incredible images; the opening sequence alone is worth the price of admission. It’s interesting to note that Ford did not make another color feature until 1948’s 3 Godfathers, though Ford did a lot of color filming during the war, notably on the Oscar-winning documentary The Battle of Midway. Black and white suited the Ford of this period, and Drums director of photography Bert Glennon, who also shot Stagecoach and Young Mr. Lincoln. On Drums Along the Mohawk, though, Ray Rennahan was also employed as second director of photography. He was an early Technicolor specialist, who won an Oscar for his work on the color photography of another period drama from 1939, Gone With the Wind.

While Drums Along the Mohawk fails to reach the exalted status of the other Ford films from 1939-1940, it still retains the unmistakable stamp of Ford’s directorial presence, provides a somewhat different setting for his most cherished thematic concerns of family and community, and presents some good performances, particularly from Colbert and Oliver. I can’t agree completely with biographer Scott Eyman’s conclusion that the “film does exactly what it sets out to do, [and] does it with humor, emotion, and theatrical dash.” But I can concur with him that it remains a “fine example of Ford the professional filmmaker.” It was a slight stumble in the series of what may be an unparalleled achievement in Hollywood history, in terms of creating as many masterpieces in such a short timeframe. And for better or worse, it is even today one of the few films to explore the days of the Revolutionary War. 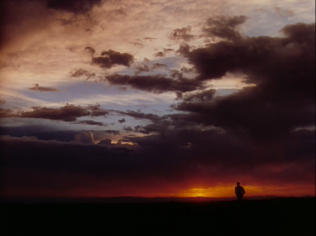 One of the most beautiful shots in Drums Along the Mohawk. Running sunset silhouette…

…and a comparable running silhouette in The Long Voyage Home.

This post is part of the Blind Spot 2017 series, hosted by Ryan McNeil at The Matinee.

Editorial note: this was my pick for February (ack). In the summer months I will be working on catching up with this project, in hopes of completing the 12 selected films over the course of 2017.

One thought on “Blind Spot 2017: Drums Along the Mohawk”